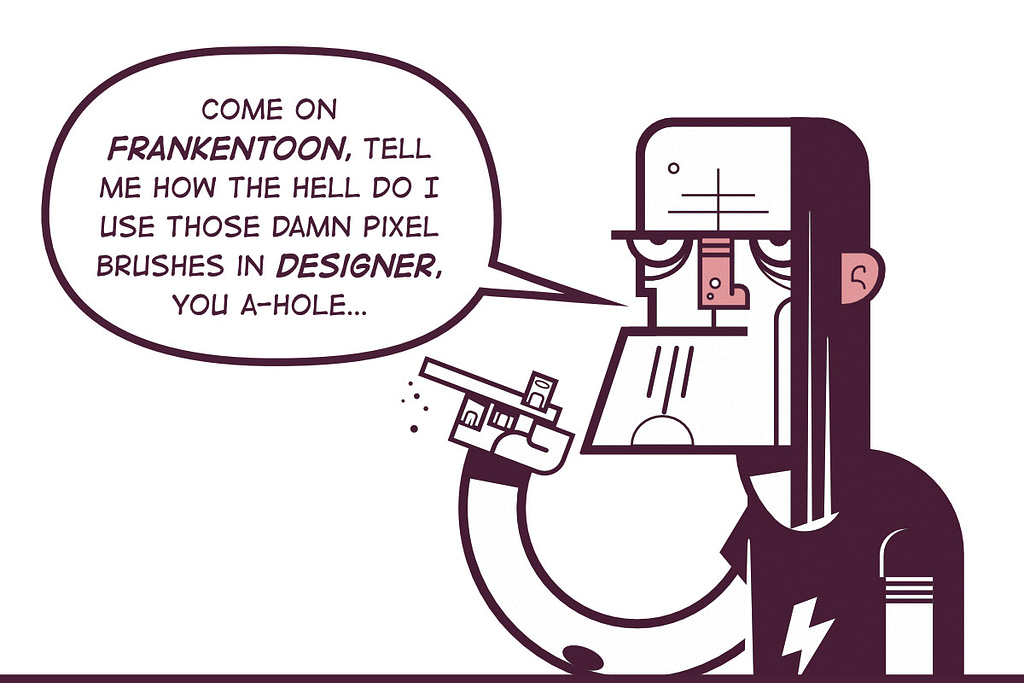 And I’ll go a little step further indeed. I’ll show you how I use either image texturesand pixel brushes to enhance my vector illustrations by 500%. Are you with me? Great!


Before we get started…

In this tutorial we’ll be using some assets that includes: a couple of pixel brushesfrom our Texturizer Pro and Pattern Painter packs, a texture included in our Rockstar Kit and a free .afdesign file. You can download these goodies in the link below, so you can follow along:

First, open up the Affinity Designer sample included with your download: “tutorial artwork.afdesign”. If you prefer, you can work with one of your own artworks, I won’t get mad, I promise. These techniques are very simple to apply, regardless of which artwork you’re going to follow this tutorial with. 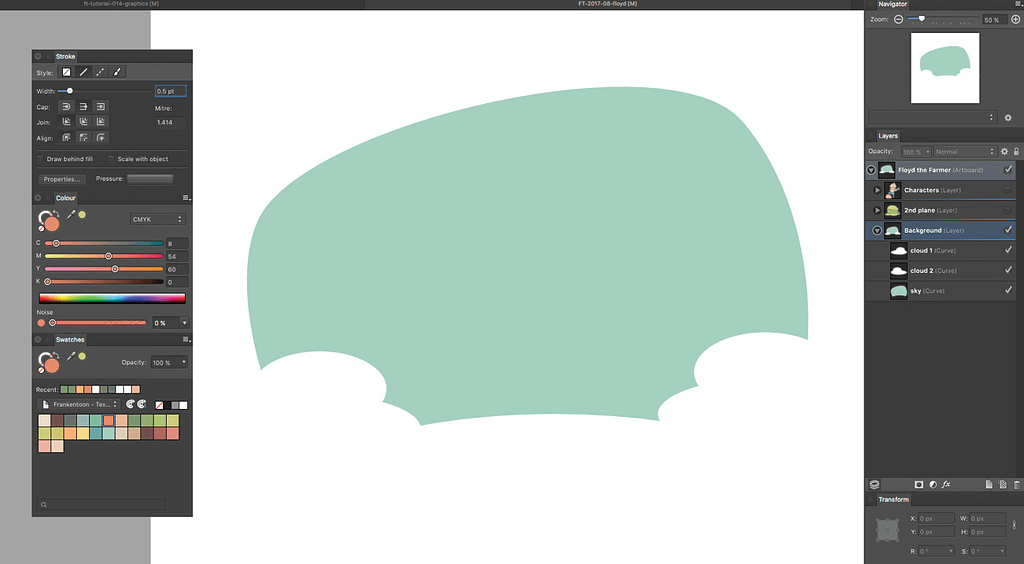 We’re gonna start with the sky. I like its shape, but it lacks depth, let’s fix this by using an Image Texture overlay. This artwork comes organized in layers, so for the sake of legibility, let’s turn off the 2 layers above the one named Background.

It’s a GOOD IDEA (notice the capitalization) to rename your Layers, Groups and Curves. If not, you’ll end up with a very messy artwork with hundreds of ‘Curve, Curve, Layer, Curve’… default titles all over your Layers Panel and would be super difficult to identify a specific object when you get back to it, specially if you’re working inside a team. 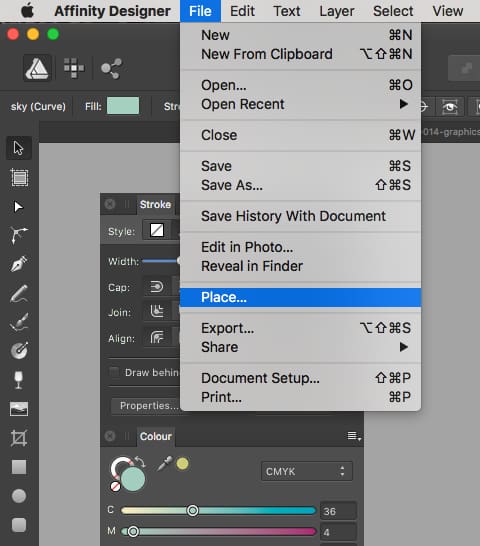 So, Where were we…? ah, yeah. First, let’s import our image texture. Go to the main menu bar, then File and Place…

Look up in your download folder for another folder called ‘Texture Sample’ and import the only image that’s inside it ‘FT-cardboard-XS’. This texture is a little bit smaller than the original that comes in our Rockstar Kit, but will do the job perfectly. 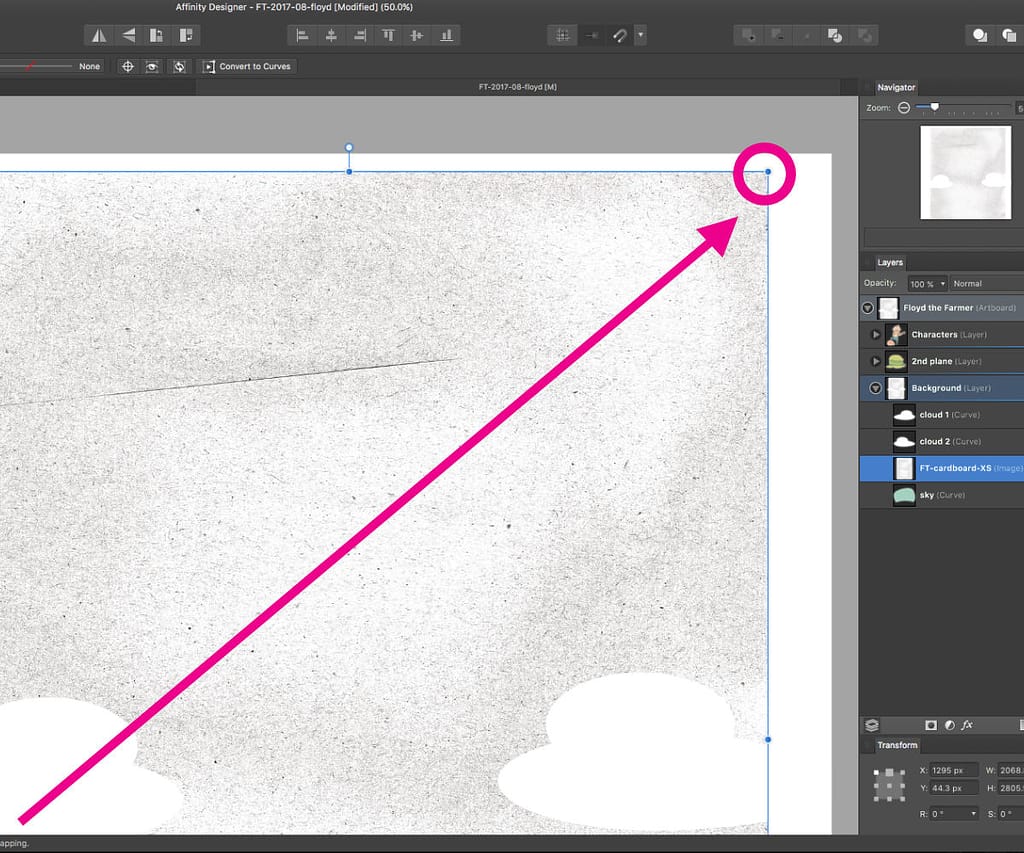 Then just click anywhere inside the canvas to place our texture in its full size or drag it over the canvas to control its dimensions as you place it. Either way, you can always resize your texture at any moment.

Designer will automatically put this new texture on its own Pixel Layer. 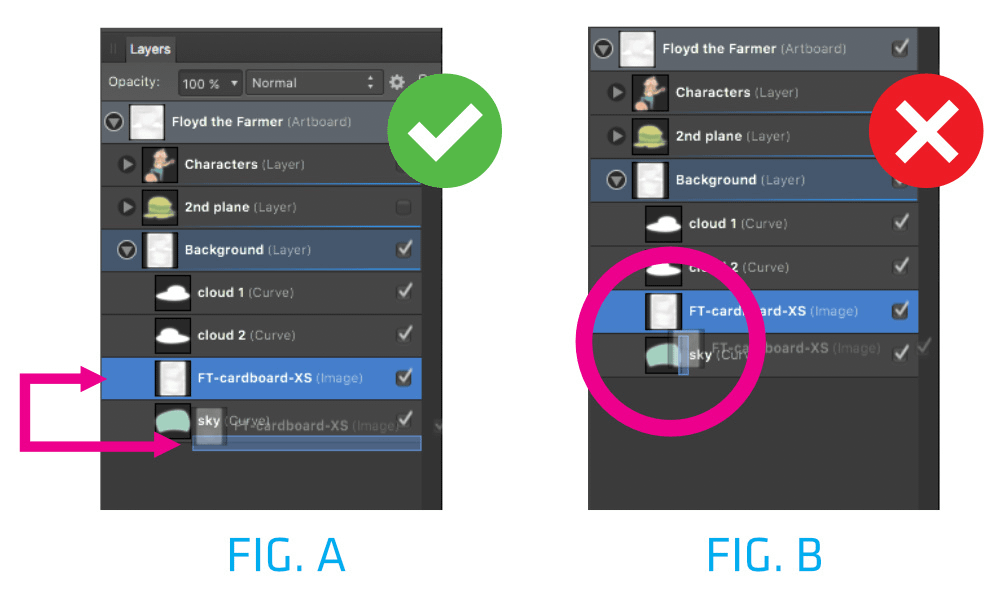 Then it comes the most crucial part, Clipping our texture into the ‘sky’ shape. To do this, you need to DRAG the texture INSIDE the shape you want to use as clipping shape (FIG. A). Be careful of not dragging it BESIDE your shape, or else, you’ll end up creating a MASK, which is a cool feature, but it’s something we’re not going after on this tutorial.

Click here if you want to watch a demo video on how the masking method works. 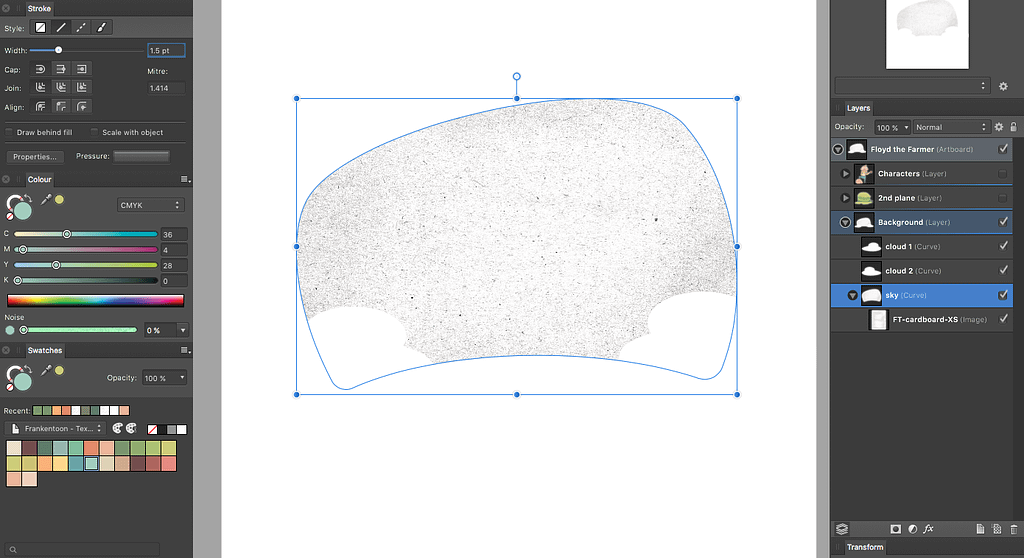 Now your layers’s hierarchy should look like the image above and now your texture is contained in the sky shape. However there’s still one minor problem… our texture has covered up our nice blue-greenish sky. To fix this, we’re gonna blend it with the sky shape using Blending Modes. 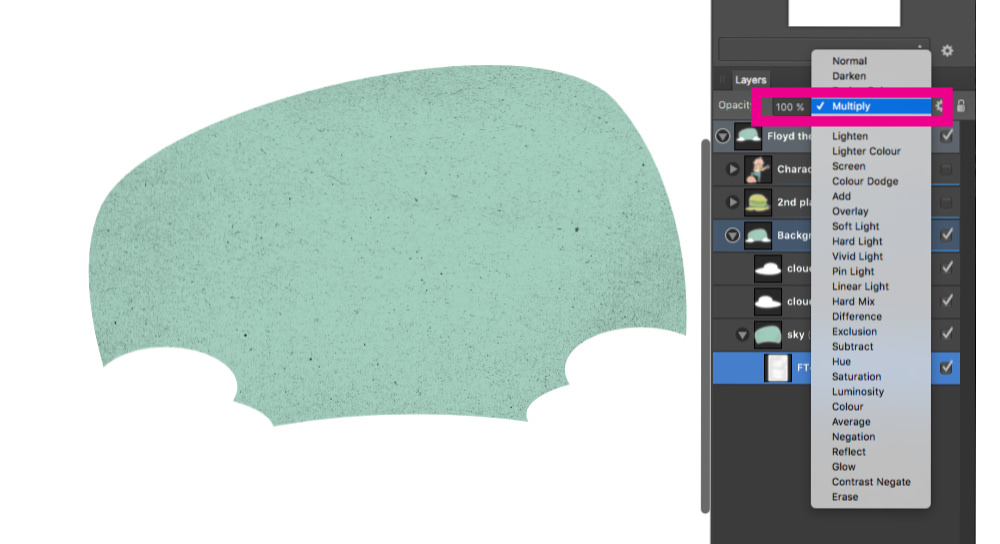 Play around with the Blending Modes until you find one that looks cool on your texture. In this case I’m happy with the Multiply mode. Repeat these steps for both clouds. If you want to move the texture to find a better chunk of the image to be displayed, just select the image and drag it around with the Move Tool.

When using Blending Modes, I also play with the opacity slider to create a smoother mix. In this case the clouds looked better when the texture’s opacity was set to 40% – 50%. 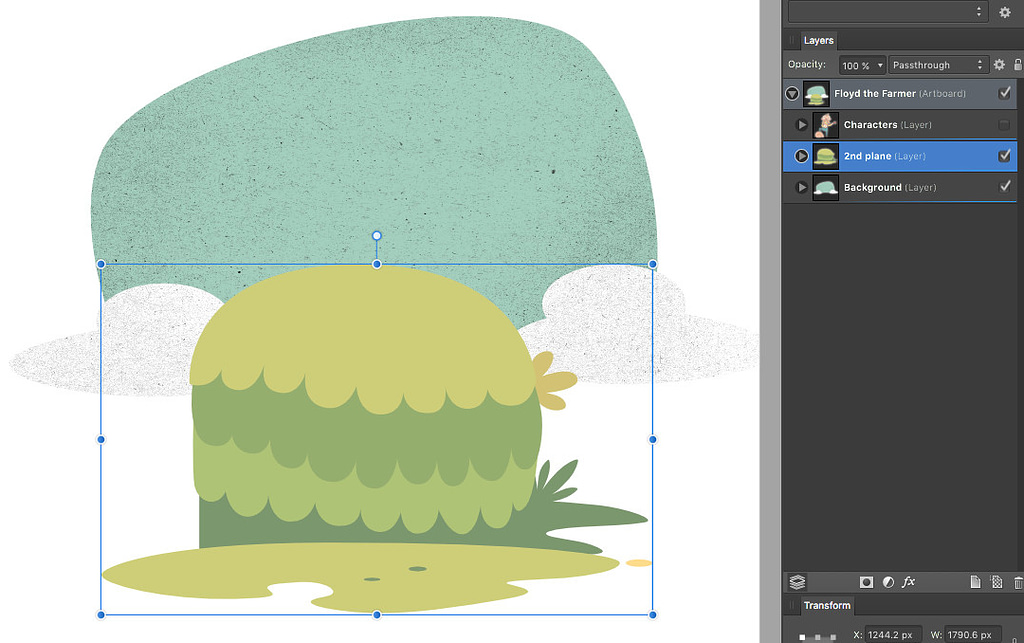 And we’re done with image textures. As you can see, it’s a very easy concept to grasp. Now it’s time to activate the ‘2nd plane’ layer’s visibility.

This method is very, very similar to the one we just see, but instead of using an image texture, we’re gonna use a couple of cool pixel brushes…

Now with this element selected, create an empty Pixel Layer.

Following the method we previously used to clip the texture inside a shape, clip this empty Pixel Layer inside the ‘bush top’ curve. Now’s where the magic begins…

Then let’s import the free brush pack that comes with this tutorial. Open the Brushes Panel and select Import Brushes… from the top-right menu 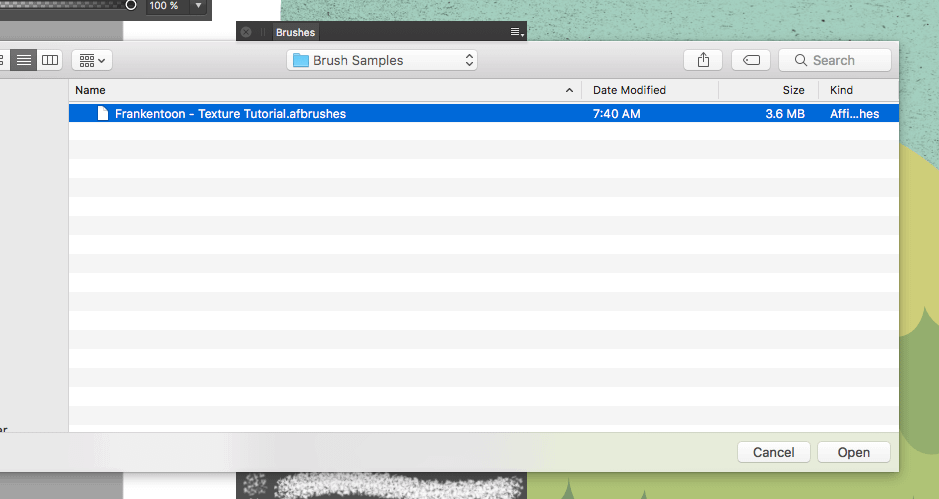 Look inside the Brush Samples folder and select the brush pack inside it. 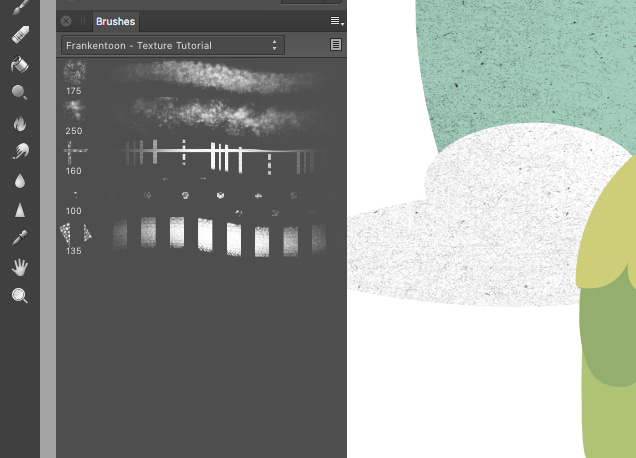 Remember that Affinity Designer supports 2 types of brushes: Vector Brushes andBitmap Brushes. Although you may be able to import Pixel Brushes in Draw Persona(or vector mode), you won’t be able to see and use those brushes until you switch to Pixel Persona. Both Brushes Panels shows completely different brushes.

While still in Pixel Persona, select your clipped Pixel Layer and rename it to something like “bush top color” just to keep track when you add more layers. Then select a sample brush from our Texturizer Pro brushes (included in your download): “FT Texturizer Pro – Demo 1” from the brushes panel and start coloring your clipped Pixel Layer (Choose a darker value from the palette provided with tutorial if you want).

Here’s where a digitizer or pen tablet comes in handy, because these brushes Flowand Opacity settings are designed to respond to the pen’s pressure . If you’re using a mouse for coloring, make sure to use a low flow value, this way the brush’s opacity will increase gradually.

Choose a darker value to give more emphasis to the shape’s volume. You can change your brush size using these shortcuts: [ = Decrease size, ] = Increase size

Using this same technique, go about the rest of the ‘2nd plane‘ elements. Remember: a Pixel Layer for every object.

Now we’re done with the background, let’s bring on our main characters. Set the “characters” layer’s visibility on. 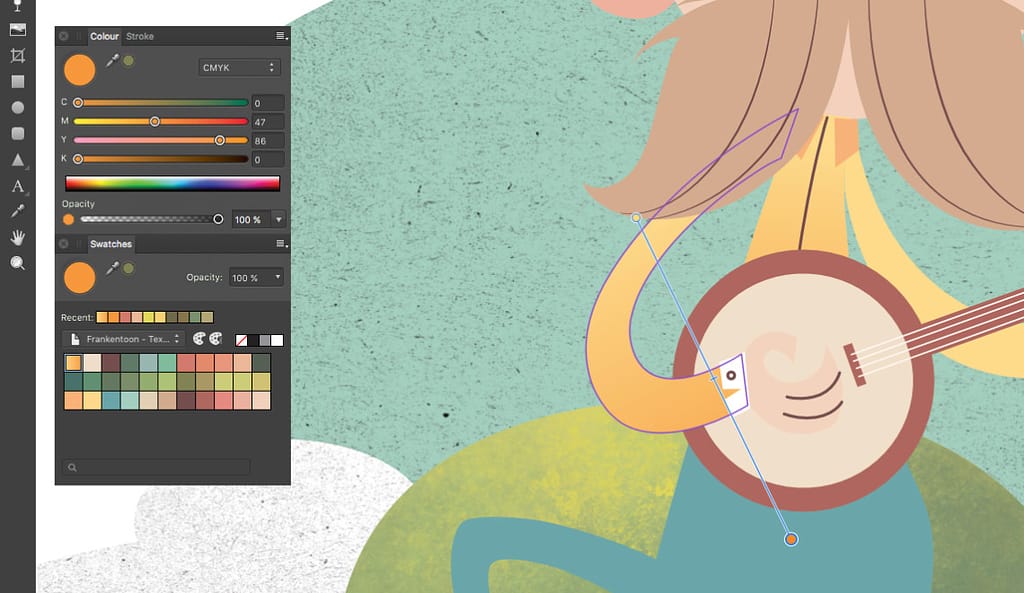 Another cool technique is to set a general lighting using gradients, before starting any texturing work. I usually do this to keep in mind the light direction while shading or painting details. Remember, all these techniques can be used combined or separated. This tutorial aims to show you different ways of doing the same task.

I.E.: This gradient-wise lighting could have been applied to the background sky as well, in the end you’ll choose which approach do you like best for each part of your artwork.

Repeat the  Pixel Layer clipping method again. This time will be giving to our character a plaid pattern for its shirt. Instead of drawing a pattern by hand (which would be too tedious), we’ll rely on one of our Patter Painter pack’s brushes (included in your download).

Switch to Pixel Persona if you haven’t already and from the Brushes Panel select the “FT Pattern Painter – Demo 01“ brush. Then using a darker tone of orange (use the swatches if you please) paint the plaid texture on the character’s torso and sleeves (see picture above).

One of my TOP 10 Designer’s features is the ability to stack up multiple Pixel Layers inside a shape. It comes really handy in cases like this, where we need to have a pattern and a texture contained in the same shape.

I want to have a very worn look on my character’s shirt, all nosy and stuff, so I use again one of the demo texture brushes to paint the volume on our character’s sleeves and torso.

Once I’m done with the shirt texturing/shading, I set the texture’s opacity about 50%, again, to create a smoother blend between different layers.

Using the same steps for the pants: 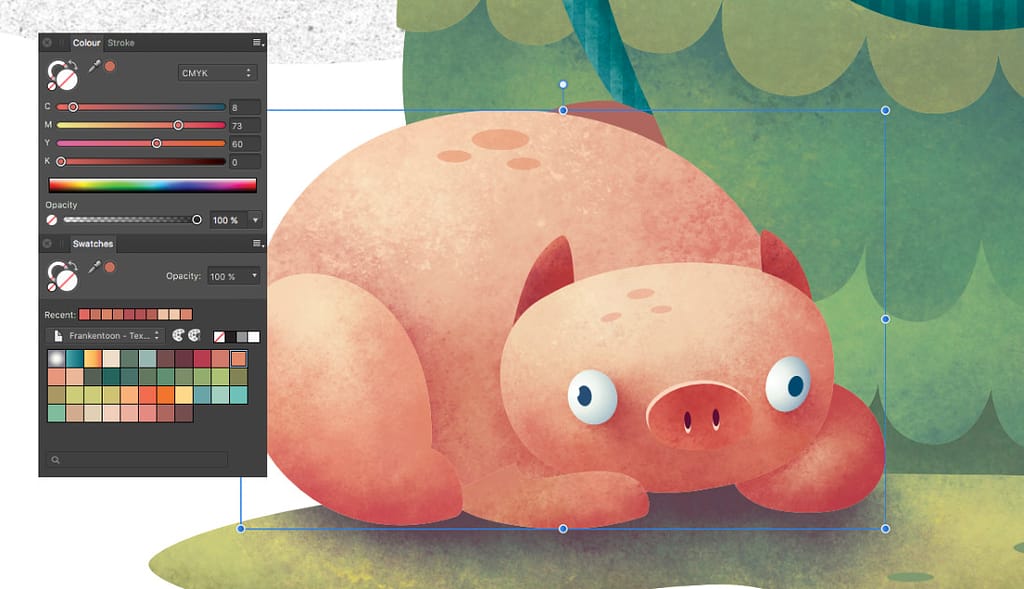 Same steps for the pig… as you can see, just by using some simple techniques, you’ll be able to add textures to any illustration, regardless of the style you’re going after. 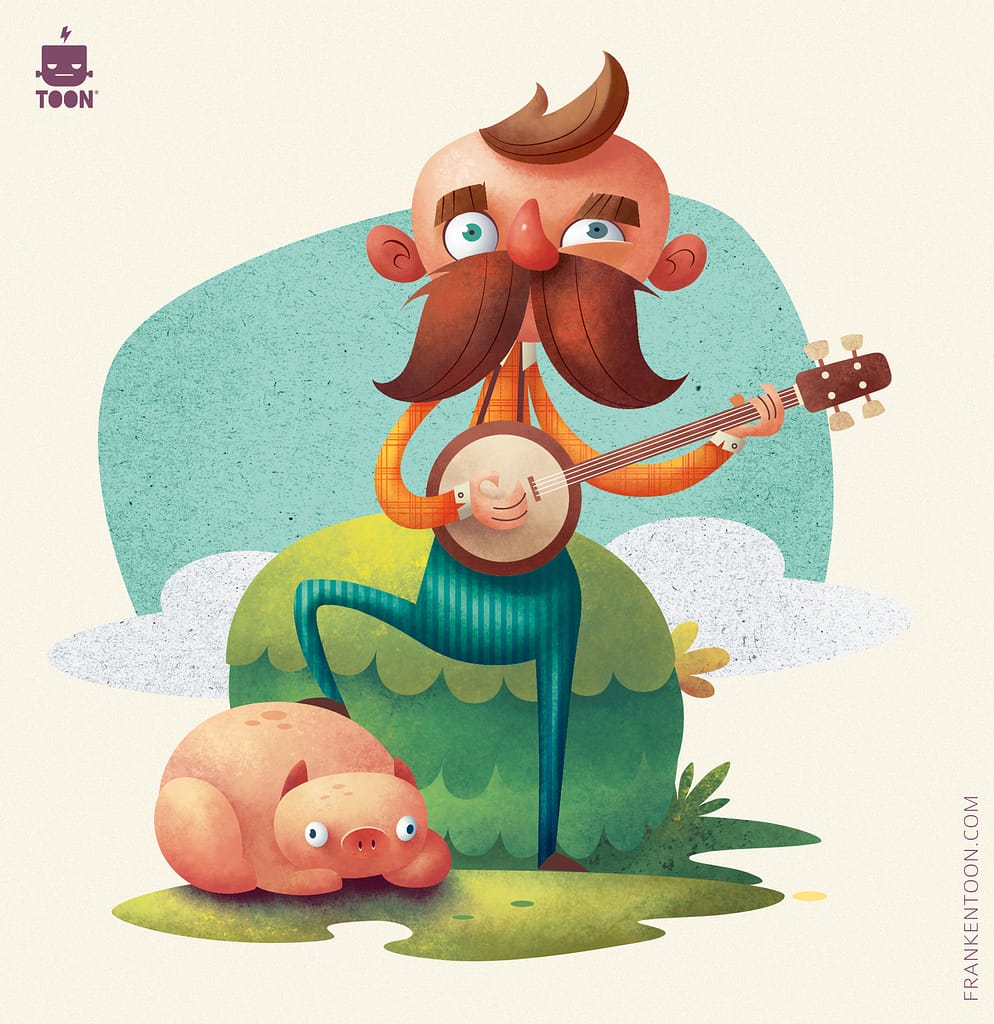 Remember that anything you learn worth nothing without actual practice, Now it’s your turn. Practice on the artwork provided with this tutorial, try the techniques you’ve learnt today individually or combined, try some patterns on the grass, use the texture image on the pig… experiment, experiment and most important, have lots of fun while doing it!